Short story, Alyssa Milano helped me get a spec script into the hands of the executive producer of Charmed. That is, unfortunately, where the story ends, but the lead-up was an experience I’ll never forget. In reality, I can’t say I was truly “almost” a TV writer, but I came a lot closer than anyone expected, most especially me. 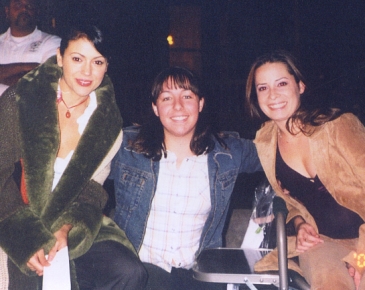 oh, just me at 19 with Alyssa Milano and Holly Marie Combs

Let’s start at the beginning. The year was 1998. Little ole me was 14, a sophomore in high school. The WB was all the rage back in those days, with Buffy the Vampire Slayer, and 7th Heaven, that personally-conflicting Dawson’s Creek that I watched into the college years (go team Pacey!). As the fall 1998 season commenced, commercials for this new show Charmed were everywhere. Vampires were still cool back then, but witches weren’t really my deal. Still, I was a teenager in need of stimulating television, so when I sat down to watch the Season Two premiere of Dawson’s Creek and found the conclusion of Joey kissing Dawson through his window to be rather eh, I kept watching, hoping the next program would not only be entertaining and engaging, but a good replacement for the Creek.

Let me tell you a little something about Charmed for those who have not seen it or not witnessed the show at its full potential: Before there was Orphan Black and Orange is the New Black, before Veronica Mars and Jane the Virgin, before Gilmore Girls and New Girl and Girls — all shows we now take for granted — there were so few female-led shows being broadcast at the time that you could count them on one hand. Buffy had only been out a year. Ally McBeal and Felicity were the only other notable female-lead TV programs. Even in those shows, the one major female lead was the ONE major female lead.

And then there was Charmed, which did not feature one female lead, not even two, but THREE FEMALE LEADS. At the time, I couldn’t predict the importance of this dynamic. I couldn’t foresee how this show would help me dedicate my storytelling career to bringing forth stories about complex women, but Charmed was an anomaly of its time for so many reasons. END_OF_DOCUMENT_TOKEN_TO_BE_REPLACED